In this two-part documentary series, we dive into the first part as it follows the life and musical career of upcoming artist Taz Tikoon. Taz starts off her docuseries in Virginia where she takes us through her hometown so we see what inspired her. We also get a deeper glimpse at who she is. Her time at the basketball court and love for balling helped shape her into the woman she is today. Basketball showed her a way to express herself and helped her gain the courage to not only craft her skill at basketball but be her eight-year-old self and make friends at her school. Her passion for basketball elevated her to playing in high school and college. 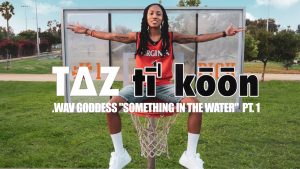 We get to see what sparked her interest in music and bloomed her rap career when she talks about how in 2012 the album release of J-Cole’s “Blown Away” inspired the Howard University student to make music, and in the following year, she drops her first album “Mentally Ill” in hopes to encourage kids to not let the labels of mentally ill define them and carry/love themselves positivity as she does. Which really makes her stand out amongst other artists, her own message helped her cope with depression and influenced her to study water which inspired not only the concept but the creation of her ep “WAV Goddess”.

Throughout the docuseries, she visits her elementary school, high school, her old homes (townhouse in Sacramento, her grandma’s house, and etc.)  in her hometown to show fans where exactly her inspiration to succeed and be the best comes from to become the thriving, hardworking artist she is now. Taz also visits her friends such as Bob Evans (who made her go hard with basketball and gave her a chance on the court)  and family like her mom, her little sister “Jay”, and her grandparents who show their love and support for her to be who she is beyond being an artist.

You can watch “.WAV Goddess Something in the Water Pt. 1” on Vyre Network, which is available in 113 countries worldwide on Apple TV, Roku, Amazon Fire Stick, Android, iPhone, and on the web.

Reply
online dissertation writer at 11:46 am

Reply
gossip slots tournament at 11:55 am

Reply
gay chat rooms no registration needed at 11:59 am

Reply
essay definition at 7:19 am

Reply
what's an expository essay at 6:01 am

how to start a college application essay https://vpn4torrents.com/

Reply
correct essay at 1:27 am

how long should an essay be https://topvpndeals.net/

Reply
examples of critical thinking in the workplace at 10:45 am

Reply
critical thinking game for adults at 8:50 am

what to write about in college essay https://checkyouressay.com/