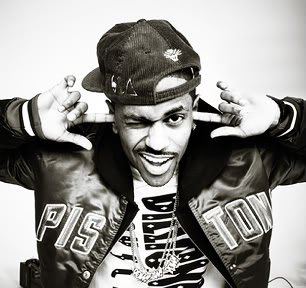 G.O.O.D. Music’s Big Sean discusses the confidence his mentor Kanye West has in him and being cosigned by Yeezy in front of Jay-Z

According to Sean, Yeezy told him he would eventually become hip-hop’s “best rapper”.

“I think he wants the best, just somebody that he thinks has the potential to be bigger and better than him, his protege or whatever,” Sean told Peter Bailey. “I remember we were standing next to Jay-Z and he was like you’re gonna be the best rapper, talking to me. And Jay was looking like, ‘Yeah, whatever.'” (NBC Nitecap)

“Big Sean’s story is one of the most amazing ever because he literally got signed off of a freestyle, to now…having the potential to be one of the biggest artists in the world,” Ye said. “What Beyonce is to R&B…Big Sean can be to rap.” (YouTube)

“You know, I am gonna be that. I’m gonna take it there. I’m not gonna make ‘Ye eat his words or anything,” he says. “I appreciate him being so outspoken and for believing in me so much. It gives me my own confidence.” (VIBE)

Confident in his own style, Big Sean recently told SOHH he would include himself in our Top 5 Dead or Alive challenge.

“Big Sean goes in there because I’m my favorite rapper. H*ll yeah. I’m deserving of being in the Hall of Fame because I changed hip-hop with a rap star before even dropping my first album. Everybody in the game you can think from Lil Wayne toDrake were influenced [by me]. They borrowed my style, [and] it showed me how far I can go in this rap game. I’m only 22.” (SOHH’s Top 5 Dead or Alive)

Keri Hilson Going Into Acting & Working On Her Third Album

Trina Gets Into Altercation Outside Of A Miami Club

VIDEO: Pusha T Says “My Name Is My Name” Will Be The BEST Hip-Hop Album of The Year