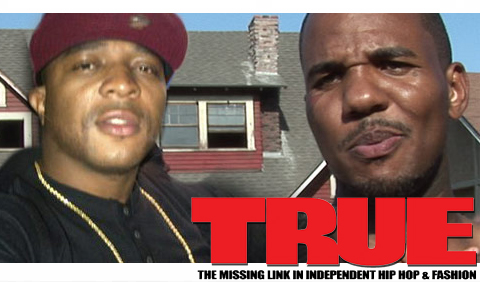 @40Glocc @TheGame – Rapper 40 Glocc is seeking revenge against The Game over a brutal beatdown caught on tape earlier this year … but he’s not after street justice, 40 Glocc wants COLD, HARD CASH.

40 — real name Lawrence White — just filed a lawsuit against Game over the July 7 incident that took place in front of a mansion in the Hollywood Hills. You probably saw the video.

According to the docs, filed in L.A. County Superior Court, 40 says he was leaving a party, when he was jumped by Game and Game’s 15-man entourage for no reason.

Game recorded the fight on his iPhone and published the footage to YouTube — under the title, “The Game Beats Up 40 Glocc Whilst Recording on iPhone Full Video.”

In his suit, 40 says the video does NOT show the full story … claiming Game had chased after him with a gun … and shouted, “Freeze or I’ma shoot, n*gga.”

40 claims he tried to escape … but Game caught up, pointed the gun at his chest and told him not to fight back or he would “end it right now.”

In the docs, 40 says he obliged … and Game and Game’s crew proceeded to beat him mercilessly … causing major injuries to his right eye, ribs, kidneys, right shoulder and back.

40 also says he suffered wounds to his face, head legs arms and hands.

40 is suing for unspecified damages — but we’re guessing he wants MILLIONS … not only for assault and battery … but he also feels Game tarnished his thug reputation by portraying him as a coward on the YouTube video.

At the time of the altercation, sources close to The Game told TMZ … Game did NOT pull a gun during the incident and insisted “it was a one-on-one fight.”