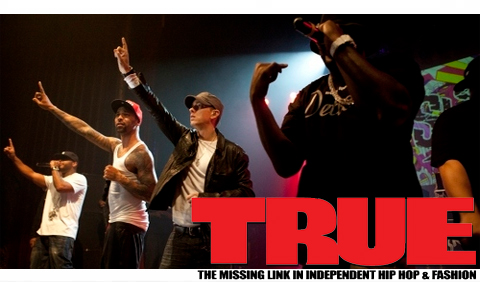 Eminem literally takes a hands-on approach with Slaughterhouse’s upcoming album, as the crew reveals he’ll handle the mixing and arranging of “Welcome To: Our House.”

By all accounts, Slaughterhouse’s upcoming album should be in stores at some point during the second quarter of 2012. An iTunes release of “Hammer Dance” and the fact that the Shady Records collective have already filmed an accompanying video back up the group’s statement that Welcome To: Our House will be dropping this spring. While pulling double duty performing at the Shady 2.0 Showcase and filming “Hammer Dance,” the group also revealed that Eminem will take on an additional role behind the scenes.

“Marshall is actually mixing right now—he’s actually mixing the entire album,” Royce Da 5’9 revealed to MTV. “So everything that’s mixed, he’s mixed. That wasn’t even the original plan, so we’re super excited about that. He’s just taking songs to another level.”

Royce added that the crew is “working out some minor tweaks” while the as yet to be revealed release date draws closer. Slaughterhouse’s peer/current label head, Eminem, has logged production credits for the likes of Jay-Z (“Renegade”) and Nas (“The Cross”) among others. And while it’s unclear if he’ll provide beats for Joe Budden, Royce Da 5’9, Crooked I and Joell Ortiz on their collective effort, it’s clear the crew is more than comfortable with him behind the console.

“Real talk, a lot of people don’t give Eminem enough credit for his production,” Crooked I added. “What he’s doing to add to the album is phenomenal. I think he deserves props and a salute for that.”