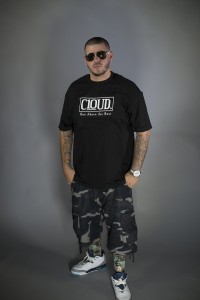 Kay Jay’s debut, “Tees, Trees & MP3’s” is finally out and has already been given two thumbs up from Free Press Houston. The writer, who saw him perform at Houston Whatever Fest, decided to keep tabs on the up-and-comer and had this to say…

One artist that I’ve kept an eye on recently, is Houston’s Kay Jay.  The rapper mixes hints of Houston’s past while keeping things more current at the same time.  His rhyme flow was top notch the first time I witnessed him spit on a mic, and on his new album, “Tees, Trees, and MP3’s,” he proves that not only is Houston’s hip hop scene still growing strong, it’s also filled with plenty of fresh faces that can carry it into the future.

“Tees, Trees & MP3’s”, is an homage to a few of Kay Jay’s favorite things and is produced entirely by Trakksounds. The subject matter ranges from the boastful, on “Take It To The Bank” to the psychedelic on “Green & Purple” to a quick slice of the feels on “Guardian Angel” which he wrote to his niece. It’s a solid effort from someone on the starting line with some very professional visuals to accompany most of the tracks which come courtesy of A Luce Vision, another name worth keeping tabs on.

Kay Jay is already mapping out the plans for his next project so stay tuned for more from this entrepreneurial emcee and give his project a listen.