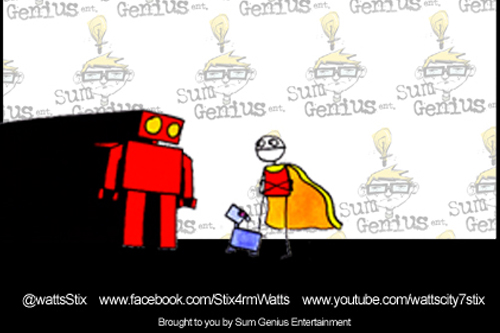 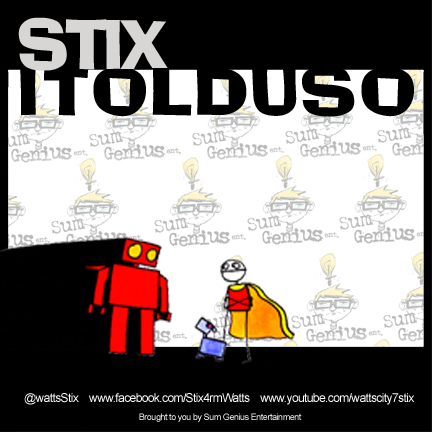 When a artists tells you that they you will see in the future how hot they are you may take that lightly and over hear it. We have now came to the future and a artists named Stix that has said that plenty of times now comes out with a hit LP named ITOLDUSO with the track record to back up all questions on how hot, is he next and did he say that!

Stix is an artists who emerged from Watts, California, was 20 when he started his music career. With his borderline eccentricity and artistic mind, belied by his music’s conventional West Coast appeal, raised his stock above his West Coast comparisons and welcomed comparisons to Kanye West, B.O.B and Lupe Fiasco. As his journey went on Stix also chose his partners wisely, working with a handful of Top celebrities like Will Smith, Tyrese, Method Man, Kurupt, Miguel, Bei Maejor, Glasses Malone, Jay Rock, Kendrick Lamar, Rejectz and more. While working on everyone elses albums and singles Stix has been working on his newest work ‘ITOLDUSO LP”.

-I named the album ITOLDUSO because I am at the point in my career where I am getting a lot of recognition for my work. Lots of people in the industry are finally telling me that I am dope as an artist and a songwriter; however, I have been telling people that for a long time. A lot of industry professionals are just now jumping on the STIX bandwagon; therefore, ITOLDUSO.

“L.A (I Love You)” Produced by The Lab Junkeeyz

“Turn it up” Produced by Don Marcos

“Be You” Produced by K. Rosevelt

“Pick You Up” ft Tiffy Produced by The Lab Junkeeyz

Why did you name the album ITOLDUSO?

I named the album ITOLDUSO because I am at the point in my career where I am getting a lot of recognition for my work. Lots of people in the industry are finally telling me that I am dope as an artist and a songwriter; however, I have been telling people that for a long time. A lot of industry professionals are just now jumping on the STIX bandwagon; therefore, ITOLDUSO.

What does it mean to you?

-It means completion and a beginning. Completion of the independent grind and the beginning of the major grind.

Breakdown 4 of your best records and what they mean.

“Bout My Business” this song is talking about I mean business when it comes to me. I’m about my money and closing deals. I am more than just a music artist, I am a business man. I own my own label, film company, clothing line, comic book, magazine and a slew of other things. I’m a boss. I’m Bout my Business.

“Raise Your Weapon ft Iggy Azalea” this song is letting every male and female rapper know who the best rappers are for the future. Raise your weapon means come with your best lyrical onslaught and I bet you still will get served by me or Iggy Azalea.

“Money 2 Go ft Hookman” this song is a fun record about the thing that everybody on this planet works for, money. I display a certain type of demeanor and confidence on this record that I don’t usually show. I promise this is going to be a lot of listener’s favorite song, not to mention the beat is ridiculous.

What do you want people to get from your album after listening to it?

I want the people to understand I am something everybody will have to get use to. I am not a here today and gone tomorrow artist. I want the listeners to know that hard work pays off no matter how long it takes. I promise that if you just keep driving towards a destination, eventually you will arrive at that destination. I want to thank all of my fans, friends, followers, and fam who have believed since day one, and I also want to thank the ones who will soon become one of the following and in due time we all can tell the industry “ITOLDUSO.”

Compton’s Buck chats with TRUE magazine. Talks about being labeled the “#1 independent artist of the year.”