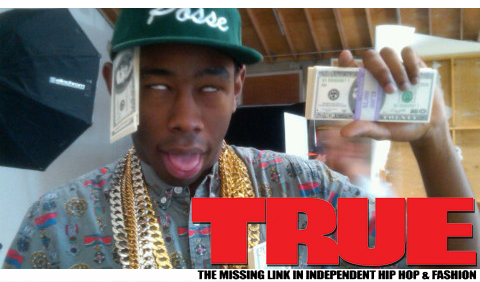 Tyler, the Creator says it’s “awesome” that Odd Future’s “OF Tape Volume 2” will land in this week’s top five despite getting very little television or radio support.

A quick glance at Billboard magazine’s Hot 200 albums chart reveals a bit of an anomaly among the expected big sellers such as The Hunger Games soundtrack and Adele’s 21. Odd Future is currently expected to land in the top five spot with estimated sales of 40,000 copies of their proper major label debut OF Tape Vol. 2. In April of 2010, the collective released “The Odd Future Tape” via their Tumblr page, but Vol. 2 marks their first group effort since inking a distribution deal with Sony last year.

@fu-ktyler
Tyler, The Creator NOT ONE SONG ON THE RADIO, NOT ONE VIDEO ON TV, BUT WE SOME HOW GOT DEBUT NUMBER 5 ON THAT BILLBOARD CHART EVERYONE CARES ABOUT. AWESOME!
Mar 31 via web Favorite Retweet Reply

As his response via Twitter points out, Odd Future’s two videos “Oldie” and “NY (Ned Flander)” have not been in heavy rotation on MTV or any other video music outlet. However, Odd Future is currently enjoying increased visibility via their Adult Swim show “Loiter Squad” and the opening of pop up shops across the country.