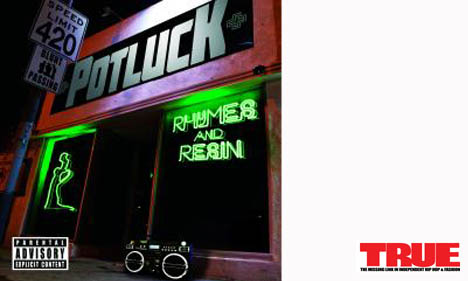 This fall Humboldt County hip-hop kings Potluck and Cash Money rapper Glasses Malone will team up for ‘Rhymes & Resin’ tour with special guest J Hornay. The fall tour is set to kick off on

September 17th, 2011 in Denver, CO and run throughout October.

“Touring with Glasses Malone is going to be dope. We are huge fans of his and have a lot of respect for what he does. I’m excited to hit the road and rock these show together,” said UnderRated from Potluck. “We’re going to have a couple more special guests out on the road with us and those will be announced shortly.”

“I’m excited to hit the road again and see my fans again,” added Glasses Malone. “I have a great live show ready for this tour so people can get the full ‘Beach Cruiser’ experience.”

Potluck has been turning heads with their new album “Rhymes & Resin”, which debuted at No. 17 on Billboard’s Heatseekers chart and at No. 28 on the Rap album charts. Potluck’s grinding blue collar work ethic, unwavering perseverance to build a fan base is one of the most impressive stories in hip-hop. Over the years, the group has created some sticky musical chemistry touring the country with Tech N9ne, E-40, La Coka Nostra and D12. Potluck can be seen taking over the airwaves in their new video for the track “My Movie” online at (click image to watch movie)

To say Glasses Malone’s “Beach Cruiser” is one of the most heavily anticipated albums of 2011 is an understatement. “Beach Cruiser” has been years in the making and Glasses Malone has been co-signed by some of the biggest names in the game, including Baby, Mack 10, Dr. Dre, The Game, and Lil Wayne. Set for release on August 30th courtesy of Suburban Noize Records in conjunction with Cash Money, “Beach Cruiser” instantly places Glasses Malone among rap’s best and features guest appearances from Snoop Dogg, Akon, T-Pain, Rick Ross, Jay Rock and Birdman, among others. The album is available for pre-order online at  http://itunes.apple.com/us/preorder/beach-cruiser/id453990886.

Beastie Boys Get Dolled Up for New Video

Reply
how to get viagra over the counter at 7:30 pm

can you buy viagra in mexico over the counter

Reply
stromectol sulfate 12 mg for sale at 5:44 am

Reply
cheap cialis prescription at 4:43 am

where to buy cialis without prescription

Reply
pharmacies online at 4:05 am

Reply
how to get viagra without prescription at 2:18 pm

Reply
price of ivermectin at 12:18 pm

Reply
stromectol pills at 2:57 am

Reply
ivermectin and covid at 1:07 pm

Reply
hydroxychloroquine for arthritis at 1:12 pm

Reply
amazon ivermectin at 7:14 am

ivermectin use in usa

Reply
how much ivermectin for 200 pound person at 8:45 am

stromectol and penicillin the same

Reply
about plaquenil capsules at 1:53 am

can i buy stromectol online canada