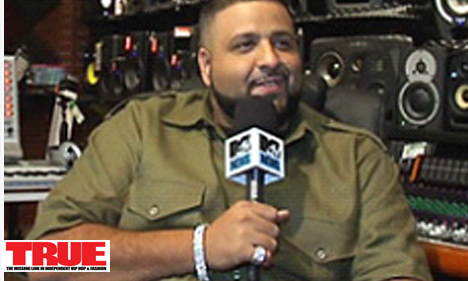 DJ Khaled just released his fifth album, We the Best Forever, which features contributions by Rick Ross and Young Jeezy. But not on the same track, which shouldn’t be surprising considering the two rappers have an ongoing feud. But according to DJ Khaled, that is no longer the case.

“They don’t have a beef,” Khaled vehemently told MTV News. “That’s people that would probably try to stir things up that have a beef. First of all, Ross is my brother. Jeezy is a great friend of mine. And if they did, I would be the guy in the middle [that would] be like, ‘Stop!’ That’s just what I do. Beef … we’re here to get money. We’re here to make great music. What’s beef gon’ do? But if somebody disrespects you and try you, you gotta do what you gotta do. It is what it is. But we hope it don’t come to that in life. And that’s just in any situation.”

Despite the Miami DJ and producer’s assertions that there is no friction between Jeezy and Rozay, the relationship between the two rappers can be described as cold at best. It began in August last year when Jeezy released the freestyle “Death B4 Dishonor.” Rapping over the instrumental to Ross’ hit “B.M.F. (Blowin’ Money Fast),” many speculated the lines “How you blowin’ money fast?/ You don’t know the crew/ Oh, you part of the fam?/ Sh–, I never knew,” were aimed at Ross.

However, the Snowman said that was not the case. Since then, both have taken jabs at each other in song and in the press. Then in November 2010, footage appeared of Jeezy in Miami rhetorically saying, “Where is your favorite rapper at?” when he was asked about Ross. To this Ross told U.K. DJ Tim Westwood, “If you really have an issue, put it on the table and handle it like a G.”

Now Khaled, who has had his own issues with 50 Cent but we will see about that, is so sure of his self that his skills at musical diplomacy that he feels he could get the Snowman and Rozay on a song together right now.

“I’ve done it plenty of times already,” Khaled, who featured both Ross and Jeezy on two songs (“Fed Up,” “Put Your Hands Up”) from his 2010 album Victory, said. “Of course I could. You want me to go make one, no problem I’ll go do it. Matter of fact, I’ll do it just for the fun of it. But absolutely I can do that. Ross is my brother, and Jeezy is my brother. That ain’t no problem, that’s easy.”

Behind the Scenes Stix Interscope Meeting

Cardi B owns How many pairs of “Red Bottoms?”