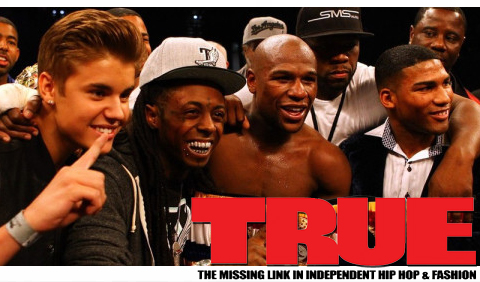 #MoneyTeam – Boxing champ Floyd Mayweather secured a dominating win against an aggressive Miguel Cotto in his Las Vegas hometown. The superstar boxer increased his record to 43-0 defeating Cotto with a unanimous decision surrounded by a host of music stars. Pop sensation Justin Bieber helped introduce Floyd along with his best friend 50 Cent who were in his corner as the boxer made his way to the ring. Following the fight Lil Wayne made his way towards center ring to congratulate Floyd.

Wayne met 50 in the ring where the two exchanged hugs and pounds posing for pictures with Floyd and Justin Bieber. The meeting of the minds marks the first 50 and Lil Wayne crossed paths since the Queens MC went on attack against Wayne a few years back.

Bieber proudly held Mayweathers belts as the boxer was introduced by the ring announcer before the start of the fight. The MGM Grand arena was filled with other A-list artists including Mary J Blige. Although suffering a bloody nose later in the fight, Mayweather was seconds away from knocking out Cotto in the 12th round of the fight.

With the Cinco de Mayo fight behind him, Mayweather now turns his attention towards a pending three months jail sentence on domestic violence charges against the mother of his children.

“Im blessed” Mayweather said afte the fight. “What else can I say but i’m blessed. Mayweather Promotions, the past, the present, the future of entertaninment. And when June 1st comes the only thing I can do is accept it like a true man would do.”

At the start of his post fight interview host Larry Merchant revealed that Floyd apologized to him following their standoff last September after his controversial victory against Victor Ortiz. As the fans booed on during the chat, Floyd again touched on the much debated, anticipated fight against boxer Manny Pacquiao.

“I was looking to fight Manny Pacquiao” said Floyd. “The fight didn’t happen. and I dont think the fight would happen because of Bob Arum. Bob Arum is in the way. He’s stopping the Manny Pacquiao fight. Let’s give the fans what they want. The wanna see Maywaeather and Pacquiao.”

Aside from breaking Cotto down, Mayweather also broke a record as the highest paid boxer during a fight earning $32 million surpassing the record previously held by ex-heavyweight champ Mike Tyson who once took home a $30 million dollar payday.

introduction essay about yourself https://windowsvpns.com/

Reply
essay definition at 12:23 am

should college be free essay https://vpnshroud.com/

how to end a college essay https://tjvpn.net/

Reply
learning critical thinking at 11:57 am

Reply
critical thinking for dummies at 9:12 am

are you a critical thinking questions https://criticalthinkinginstitute.com/

Reply
connexions gay dating at 6:48 am

write my essay for cheap https://checkyouressay.com/

Reply
keto coleslaw recipe at 9:03 am

Reply
strategy sex games at 5:15 am