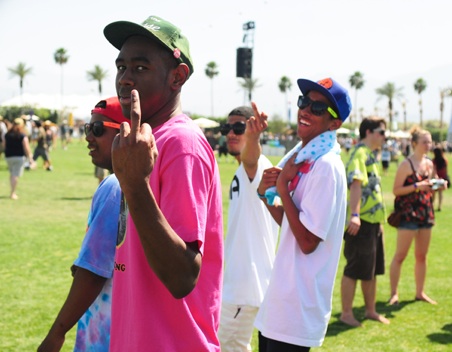 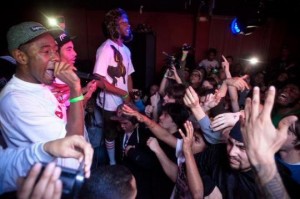 Odd Future tour comes to a stop in New Zealand: The group was set to perform at the annual Big Day Out festival which stops in several cities in New Zealand and Australia. A local activist Calvin Bennachie, took his complaints to the  owners of the Mt Smart Stadium venue, the Auckland City Council.

“Lyrics such as those played by Odd Future increase the societal discourse against lesbian, gay, bisexual, and transgender people, a discourse that encourages bullying and violence,” said Bennachie. “By allowing Odd Future to play at Big Day Out, you are proving that you have little concern for the lives and welfare of LGBT people, that you are willing to endanger their lives, and seek to encourage stigmatisation against them. I find this disappointing in an organisation that could do so much to enhance the self-esteem of youth, reduce stigma, and discourage violence.” (Billboard)

The festivals promoter Ken West is working with the group to set up a separate headlining show for them. Details of the show will be announced in upcoming weeks

Reply
bahis siteleri at 7:52 am

Reply
can you buy viagra over the counter in us at 2:50 pm

Reply
sildenafil over the counter us at 7:01 pm

Reply
stromectol for sale in canada at 5:32 pm

hydroxychloroquine for sale over the counter

Reply
how to get cialis prescription online canada at 1:13 pm

tadalafil 10 mg without a prescription

Reply
european pharmacies shipping to usa at 12:04 am

viagra nz over the counter

how to get viagra usa

Reply
ivermectin and cancer at 10:28 am

ivermectin rosacea before and after

Reply
is ivermectin for horses safe for humans at 2:48 pm

Reply
ivermectin pills for scabies at 8:04 am

Reply
shop for generic ivermectin at 3:01 am

Reply
hydroxychloroquine for sale at 12:36 pm