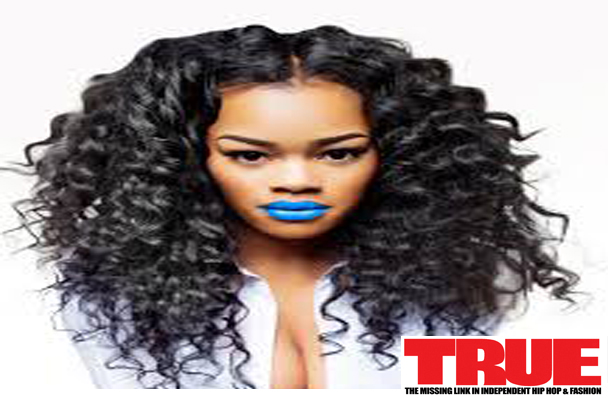 October 7th, marked the launch of Teyana Tuesdays with the release of a second album track viral video for “Business.”  Each Tuesday thereafter (through October 28th), another track (with video) from VII will be released, in advance of the November 4th arrival in stores of VII.  Digital pre-orders for VII will begin on October 21st.

In 2013, Teyana, in association with adidas Originals, disrupted the boys’ sneaker world with the release of the women’s Harlem GLC silhouette, which paid tribute to her love for retro basketball sneakers.  The inside of each shoe bore a personal quote from Teyana: “I’m From A Planet Called Harlem, Where Dreams Do Come True.”  Due to her massive appeal, the GLC sold out within 10 minutes of the nationwide release. Thanks to their colossal success, Teyana has created a woman’s clothing line, Unbothered for Taylor’d & Bow, which she show­cased in Las Vegas for PROJECT MVMNT in August, and in New York during NY Fashion Week.  Teyana has also partnered with the hair company My Exstensionz to release Taylor’d Textures, a line of products inspired by her signature curls.

23-year old Teyana released her debut mixtape in early 2012, The Misunderstanding of Teyana Taylor, which immediately spun off a pair of hot tracks: “DUI” featuring fellow Def Jam artists Fabolous and Jadakiss; and “Make Your Move” featuring Wale.  The mixtape paid homage to Teyana’s classic ’80s and ’90s R&B influences, including Janet Jackson, Mary J. Blige, and especially Lauryn Hill.  Prior to that, Teyana shook up the Internet and Twitter world with her cover of Drake’s “Marvin’s Room,” dubbed “Her Room.”  Teyana closed out 2011 as the opening act for The Game’s European “Red Tour.”

Before joining 21-time Grammy Award®-winner Kanye West’s G.O.O.D. Music roster, Teyana began as a protégé of Pharrell Williams, signed at age 15 to his Startrak/Inter­scope label (a division of Universal Music Group).  Starting with her extravagant, ’80s-themed coming out party on MTV’s “My Super Sweet 16,” and as the petite pop locker in Jay-Z’s “Blue Magic” video, Teyana has maintained an active profile on the pop music scene.  In addition to singing on Kanye’s My Beautiful Dark Twisted Fantasy album, Teyana has collaborated on projects with a Who’s Who of A-listers, among them Nicki Minaj, Chris Brown, Willow Smith, Jadakiss, Cam’ron, Jim Jones, and Beyoncé, to name a few.

On the big screen, Teyana’s sassy style was seen in Stomp the Yard 2 (2010) opposite Columbus Short and Keith David.  Her breakout appearance took place in Tyler Perry’sMadea’s Big Happy Family.  Other films include Gang of Roses 2 with Rocsi Diaz (Enter­tainment Tonight) and Amber Rose; The Love Section with Mekhi Phifer; and Brotherly Love with Keke Palmer. Teyana’s countless magazine covers and spreads include VIBE, Teen Vogue, Nylon, Giant, Fader, Rap-Up, TRACE, Paper, and the New York Post’s Page Six.  She has strut the runway at the Diesel Fashion Show for Mercedes Benz Fashion Week, The Lady Cavi runway show for Macy’s, and for high fashion designer Zac Posen on BET’s “Rip The Runway.”