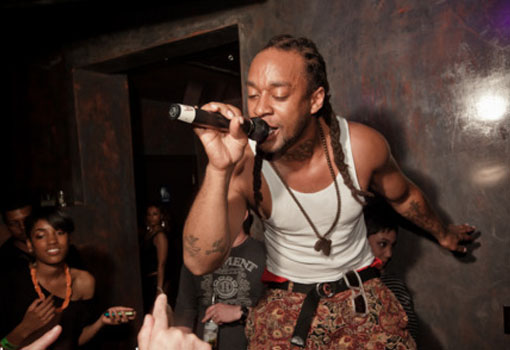 Born and raised in LA, Ty dolla $ign ends his Beach House Tour in his hometown at El Rey Theater, an intimidate venue located Mid-Wilshire. Openers Mila J, Bobby Brackins, Ca$h Out, and Joe Moses kept the audience busy before the man of the hour steps on stage. The interim was filled with none other than DJ Mustard tracks, specifically from his “Ketchup” mixtape. Surprinsingly, even these tracks didn’t prepare the crowd for the level of ratchet-ness El Rey was about to experience.

The curtains draw back, and there stands Ty Dolla $ign posted on the mic, hoodie, shades, dreads and all. His set was filled with guest appearances, tracks from his Beach House EP, and a special tribute to his hit single “Paranoid” going platinum.

Before things got too rowdy, Ty$ performs the chorus of “Toot It and Boot It,” a collaborative track with the homie YG, stating this is the track that launched his career. The young artist proceeds to bring his crew out on stage, each equipped with their own water gun. Note, this wasn’t one of those small toy water guns that fit in your hand, but a legit machine gun style one. Girls took cover while the guys stood and tried to take it like a man. There is no doubt every person on the floor was hit with some of that holy water.

Things got heated fast as Ty$ asks the crowd for one female to come on stage. He serenades her with his sensual track “4 A Young,” as she starts to feel herself, dancing solo off to the side. Deeper into the song, the two eventually link, and she gives Ty$ his own private lap dance. Homegirl was wearing a skirt… And if that wasn’t enough- at one point, he screams “I wanna see some titties!” The crowd loved it. 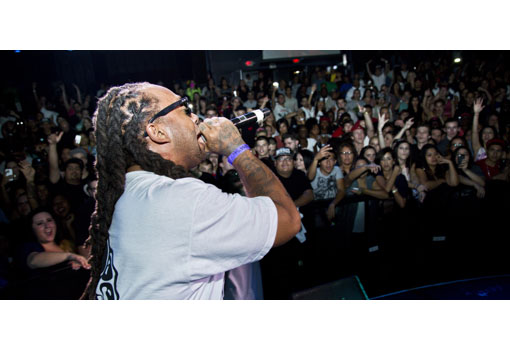 On a lighter note, Ty$ showcases his diverse musical talent, performing with a live band in the background, something a lot of rappers seem to be doing lately. He plays the guitar briefly and moves on to a voice enhancer while simultaneously playing the piano. This sound of auto-tune was awfully familiar, when did T-Pain get on stage?

The first guest appearance was made by Juicy J, as he performs “Show Out.” At this point, El Rey was indefinitely turnt. The game changer came when Ty$ brought out Wiz Khalifa. They perform “Or Nah” and chant “Taylor Gang.” At this moment, Wiz’s Taylor Gang comes on stage as he performs “Hol’ Up (We Dem Boyz).” Absolute chaos, in the best way possible. Last but not least, out comes Trey Songz, performing his most recent single “Na Na.” The two close the show with “Paranoid (Remix).” That beat will never get old, thank you DJ Mustard.

Before Ty$ exits the stage, he is presented with the plaque for his hit single “Paranoid” going platinum. What better way to end the tour? He shares the moment with his father whom he brings on stage, emphasizing his love and appreciation for his fans, friends, and family.

Moral of the story, Ty$ has made a name for himself and proves he is here to stay. This is completely evident through tonight’s show, as well as the growing success he has attained thus far.

Rah Digga | Never Back Down (EP)

Future – Behind the Scenes of Where Ya At ft. Drake

Reply
viagra over the counter at 7:38 am

viagra over the counter

Reply
where to buy viagra over the counter at 9:19 pm

Reply
soolantra for sale at 6:18 pm

Reply
can i buy viagra over the counter in india at 3:06 pm

Reply
hydroxychloroquine canada for sale at 12:43 am

hydroxychloroquine for sale on amazon

Reply
how to get cialis prescription in canada at 6:47 pm

how does viagra work

Reply
online viagra cheap at 9:57 am

Reply
sildenafil 50mg tablets at 2:21 am

ivermectin stays in system for

is ivermectin safe for humans

Reply
paid essay writing at 5:03 am

Reply
best essay writing at 2:27 am

help me write an essay https://student-essay.com/

Reply
online gambling reviews at 5:33 am

Reply
cialis drugstore at 12:24 am

benefits of daily cialis use

Reply
ivermectin for heartworms at 7:40 pm

Reply
buy viagra over the counter in canada at 10:21 pm

buy viagra over the counter in canada

Reply
writing argumentative essay at 12:07 am

writes essay for you https://essaysnet.com/

Reply
generic viagra pills at lowest prices at 11:11 am

Reply
is ivermectin otc at 6:22 pm

Reply
ivermectin prices human at 11:01 am

ivermectin rosacea before and after

Reply
stromectol for humans at 3:45 pm

stromectol have penicillin in it

Reply
write descriptive essay at 6:04 am

Reply
write college essays at 11:45 am

Reply
prednisone dispersible tablets at 10:12 am

use of stromectol and potassium antiparasitic

Reply
gay dating site for teens at 5:28 am